The Box Salesman focuses on a recent college graduate named Evan Billings, who is an aspiring songwriter. 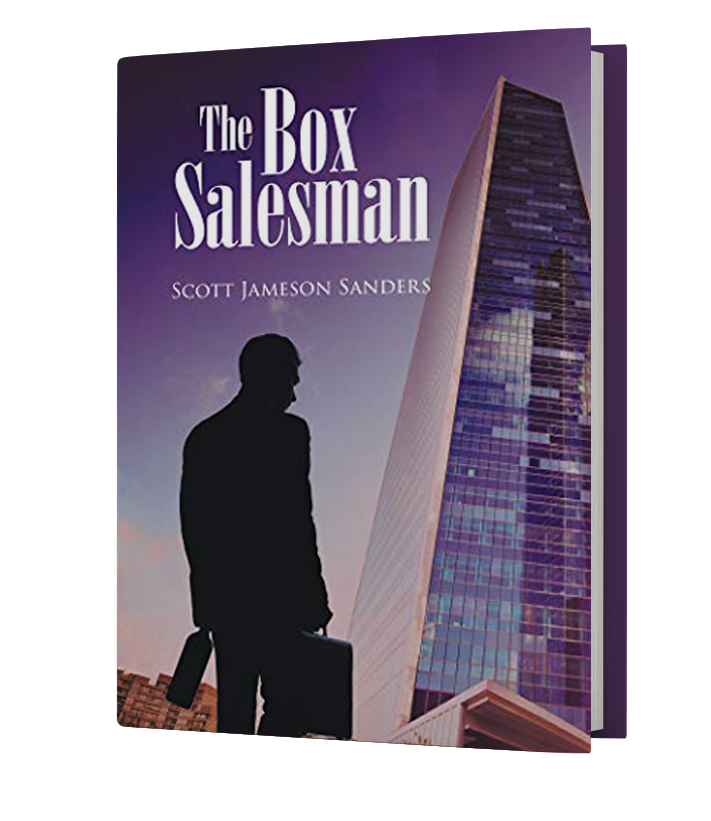 A good read. I truly enjoyed this well-written book told in first person by the lead character of the book. The protagonist was a flawed but very real and likable man. The kind of guy you would have wanted to grab a drink…or three with on a regular basis. If this wasn’t a true story, it was a accumulation of true stories. I look forward to reading more from this talented author.
– Woody

Great Read! What a great book! Enjoyed it from beginning to end. Scott cleverly uses classic pop/rock songs as chapter titles. Should be made into a movie! Can’t wait for his next book.
– Andy Atkins

A good read! This book is well written and really kept my attention. The interjection of song lyrics was an interesting touch. A good, short read!!
– James A. Goldsmith

Fun read! Reminded me of some of my earlier career and dating struggles!
– Martha

When I first read the title for this book, “The Box Salesman,” I was led into thinking it would be another of those formulaic manuals for entrepreneurial success, with a sobbing story in the beginning and tales of self-promotion that reach into absurdity. And oh, how was I pleased to see that I was completely wrong!

The push of adult responsibilities sets him in Western Stone, a company that sells paper. His boss, the fiery and foul-mouthed Mr. McDermott, deal him all the cards Evan never knew he would ever need, both good and bad, and the salesman sets off in his journey of self-discovery through confusing relationships, alcohol, and law troubles, culminating into being face-to-face with tragedy. And just as for most of us, he ends up finding his way through it all.

“The Box Salesman,” by author Scott Jameson Sanders (who also penned the House of Remember When), is a simple story about a young college graduate, Evan Billings, in his endeavors as he starts his adult life smack dab in the bustling and alluring New York City of the 1980s as a salesman.

And like any other young man, he has a moving passion, a dream to fulfill in songwriting. And just as many other young men, he gets his dreams shunned and constantly crushed by his somewhat narcissistic parents. That made Evan’s tale much more relatable to me, as I have been there too.

Sanders develops the story in a very easy-to-read yet masterful way. Since it is a tale narrated in the first person by Evan himself, we get to see the weird new world he is in through his inexperienced eyes, which bonds us to his feelings through natural rapport. While the story is lengthier than some books, it is also thoroughly enjoyable because it doesn’t drag on endless descriptions or inner trains of thought that don’t add to the story or its characters. After all, if we see New York through Evan’s mind, the New York minute has to rule the pace of the storytelling technique – but never faltering in delivering all the details we need. It is a charming and skillful way to pull us further and further into reading more. And when we least expect, the story has run its course, and we are left fully satisfied.

I can highly recommend “The Box Salesman” for readers of all ages. However, I’m sure it will strike harder for those who are 20 and older because no matter what generation the reader is from, the human struggle of facing adult life that Evan goes through is timeless and common to all.